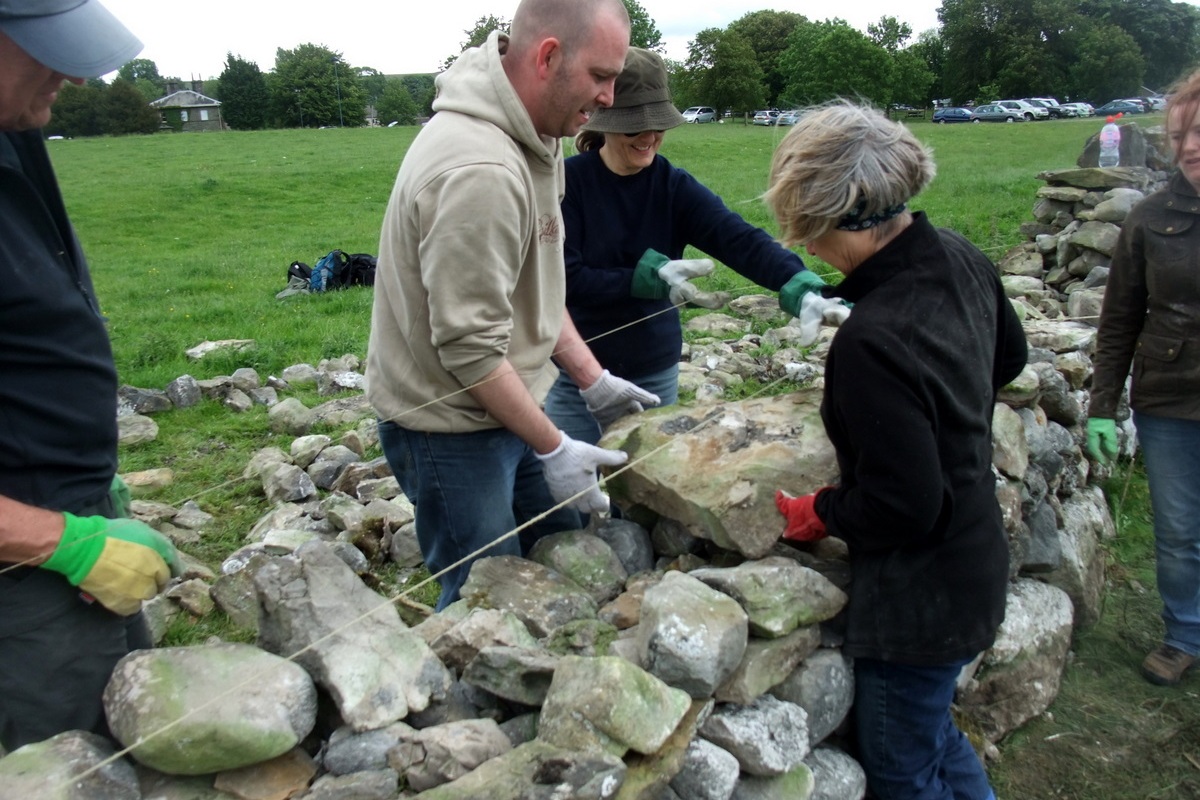 If like me you have grown up used to seeing dry stone walls zig zagging the landscape you tend to take them for granted. When I found out that there was a beginners course in Dry Stone Walling at this years Grassington Festival I was immediately curious because I had always assumed that they were naturally occurring features, presumably growing organically over a long period of time. Turns out you have to build them.The weather holds some menace as I join my fellow students in the Yorkshire Dales National Park car park. We congregate around a mini-bus waiting to be taken to some idyllic location with a needy section of wall so it’s something of a surprise when instead we are walked 50 yards away from the car park to a section of wall that looks reasonably intact.

Our tutor – a farmer from the nearby village of Burnsall – has been building and maintaining walls for decades so this ancient craft is second nature to him. At least we hope so as he has a hangover following a heavy night out in Manchester watching Whitesnake, a band as old and weatherworn as any dry stone wall. Our first instruction is to dismantle a 20ft section of wall that has been identified as being in need of renewal. It looks fundamentally OK to me but on comparison with other sections it does seem to have succumbed to gravity in all the wrong places over time. People of a certain age know what I’m talking about.

The wall is to be taken down systematically – that is we will pile different sizes of reclaimed stone separately to simplify the rebuilding process. What starts out as a carefully considered grading process becomes a chuck-it-in-the-pile affair once we realise just how long this is going to take. As we near the bottom of the wall the stones get larger and 2 or 3 people are needed to shift the big daddies.

The base layer includes some massive brutes and to my surprise we are instructed to remove these despite their semi-permanent anchorage to the Yorkshire hillside. Spades are used for leverage and as one of these snaps under the strain an uncompromising metal piton is employed to jimmy up the most intransigent boulders. Except that is for one behemoth that wins the battle against our leader’s hangover and is allowed to stay.

Prior to the rebuilding process I am charged with the responsibility of straightening up the exposed ditch edges with the spade. When I suggest that an edging tool would be ideal for this our stone-hewn head-banging Dalesman casts a me a pitiful look as dark as the moors in a storm. I get to work with the spade and set aside any more middle class observations.

The principles are simple enough. You build the wall up layer by layer using the largest stones first and creating a level surface each time on which to build the next layer. You are looking for some overlap to increase strength and when your stones do not span the entire width of the wall (approx 30” at the base) you look to fill the inside gap with the low grade stones. Stability is key but cosmetics are also important.

The building process is slow. Apparently an experienced waller might construct a 5 foot section in a day. Next time you are casting an eye over a wall strewn landscape in the Dales or the Peak District consider the countless man-years of back-breaking effort that has gone into creating this vista. There are mitigating factors: walls may stand for 300 years without any need for further maintenance. Also consider that the stone for these walls often came from the fields-to-be that were littered with glacially deposited rock so the building process also served as a clearing process.

After a break for lunch we return to finish what we started. A length of twine each side of the wall is moved up as we progress and indicates the decreasing width that we should be aiming for.

Our leader is not a man of words. Occasionally he looks at a stone you have deposited and tuts. “Don’t put that one there – it’s a walling stone”. Forgive me but aren’t they ALL walling stones? Translation: That’s a nice looking stone, save it for an exposed face instead of the interior section. When questioned (and once the residue of last night has settled) he does have real expertise to impart, but only if you ask.

Proceedings gather pace as the wall grows. A trailer of low grade stone is towed alongside our wall by Landrover and we use this to populate the enclosed inner section of wall. I fear to ask if the addition of stone to a wall that had previously attained the required height won’t in fact result in a completed section a foot taller than the surrounding wall but after the edging tool debacle I bite my tongue.

And then we are finished. Eight of us have each spent four hours of our lives rebuilding a 20ft section of wall that seriously looks like it might just still be standing in 300 years time. Assuming hungover Dalesman doesn’t reverse the trailer into it…

There’s an intermediate course next Saturday that looks at wall ends, curves and sheep runs but I don’t feel the need to attend this. Or at least my arms don’t feel the need to attend this. Slave to the new keyboard generation my upper body isn’t used to this sort of thing and so it is purely as a means of warm down that I lift a few post-construction pints at “The Dev” with my fabulous fellow wallers Dave and Annie from Leeds.

There’s music in the square and as we chat and listen I feel a small sense of pride that at no point do we hear the distant rumble of falling rock. Three hundred years?

3 thoughts on “Built To Last”