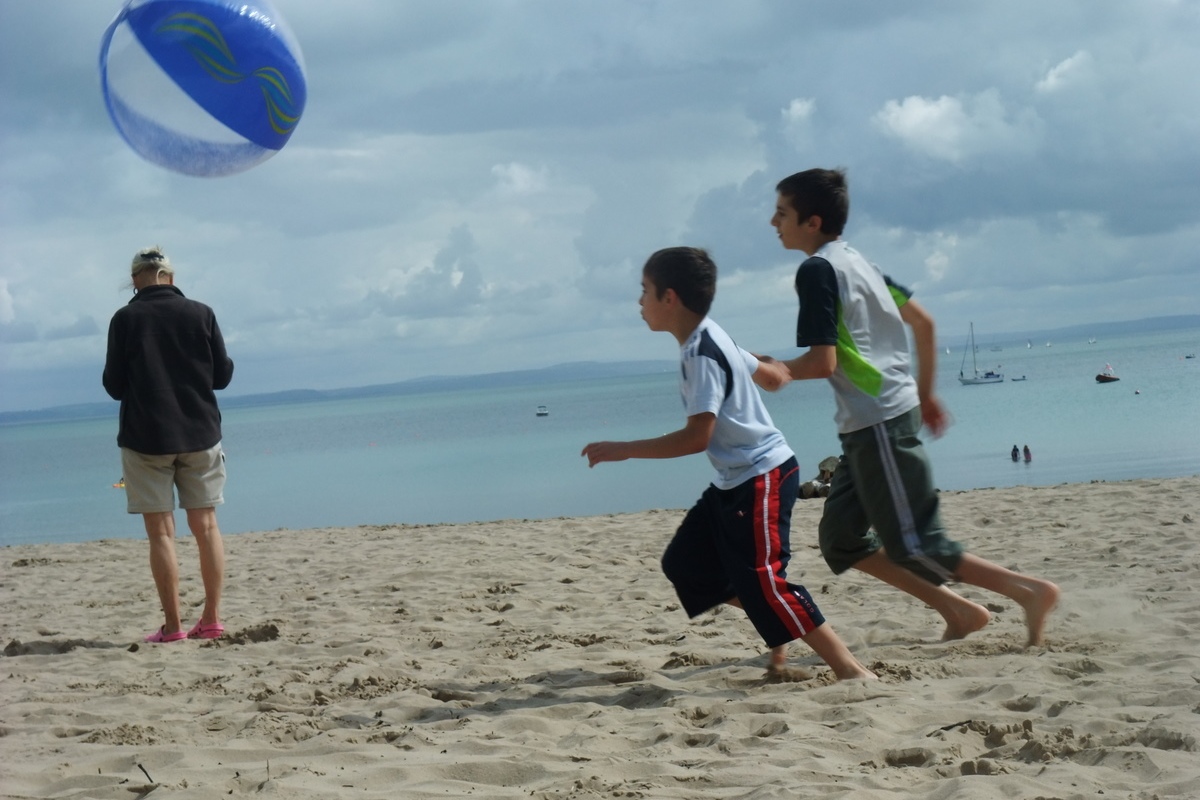 They say you should never go back. Quite who “they” are and what they were referring to is unclear but they might have been talking about going on holiday with your entire family long after you have left home and stopped doing this kind of thing.

So here we are the six of us in a cottage in Tenby, South Wales; me, my parents, my sister & her two boys aged 10 and 12. We are going to spend a happy familial week together doing all the good things that families do and none of the bad things…

I’m the only one who has been to Tenby before, many years ago and I just remember it being very nice, but not why. Tenby is still very nice it has to be said. The Welsh Tourist Council probably call it the jewel in the Welsh Riviera which would be fallacious in at least two important aspects, but we are all in the holiday mood and this traditional seaside town on this stretch of coastline does have all the ingredients for a great family holiday. Weather and family dependent.

We spent almost the entire week in Tenby with the North Beach and old shop lined streets a mere pebbles throw from our cottage. The resort has been a tourist retreat since paddle steamers ferried Victorians from Bristol and Cardiff onto a long lost pier in the 1800’s. Our own cottage was built in 1850 and was constructed in part from timbers taken from boats of the time. Nelson once stayed in the town and maritime significance is sustained by two lifeboat stations manned by townsfolk. The pretty harbour is fun to explore by day…

…and provides a peaceful view at night…

…with the exception of Thursday when a legion of rowdy A’Level students hit town to celebrate their grades or drown their sorrows.

The central theme for a family holiday has to be the beach. Tenby has two – the imaginatively named North Beach and South Beach. Due to the fabulous location of our lodgings the former can be reached within 5 minutes. By me that is. For a multigenerational family this, optimistically, is a 20 minute extravaganza involving numerous abortive attempts to leave the house, delays looking in shops and at least two arguments between the boys.

In defiance of the MET office we have plenty of sun and therefore plenty of beach weather. The following themes emerge:

Boys running around endlessly. In fact this was also a theme in the street and around the house but the sand was better suited. They are at that wonderful age when a beach has no horizon…

The older boys also did their fair share of running about throwing and (sometimes) catching a wonderful frisbee that I got free with a pack of Kelloggs Frosties about 30 years ago. “Tony’s soaring saucer” – it’s Great!

When we ran out of energy for this I took my father on at boules. Obviously I let him win…

It was after one extended sweaty game in the full glare of the oft-so reluctant summer sun that I noticed my father unzipping his fleece. I have long since failed to be surprised by this sort of behaviour from a man who without supervision would be floor-walking the beach in a shirt and tie.

Obviously there were sand-castles to be built and all four men/boys undertook projects that kept them quiet for a while.

I was particularly proud of my own creation

South Wales isn’t playing ball. It might not be unbroken beach weather but there is never a proper wet weather day so we decide to have a token wet weather afternoon anyway as a respectful nod towards holidays of yore. Silent World (renamed The Cacophony Dinhouse following our trip) is an aquarium/reptile centre set in the improbable confines of a deconsecrated church. It had all the makings of a 70s heavy metal album cover as we headed up through the overgrown graveyard towards the Gothic entrance.

Downstairs there are fish, crustaceans and my personal favourites, the axolotls salamanders from Mexico – a kind of missing link between sea creature and land lubber. Upstairs the rock album theme continues with hairy great spiders and various snakes. A rather bored looking Boa is trotted out for a handling session and the boys take it in turns to wear the put upon creature.

Fortunately the boys had been fed and so the snake was in no immediate danger.

When in Wales you have to visit at least one of the many castles and the nearby town of Pembroke has a belter. The walls and towers are largely intact and three sides of the fortifications are surrounded by water. This is a proper castle and not one of the piles of stones you sometimes come across. Henry VII was born here apparently. Or something.

The family disperse amongst the stone corridors and only later reassemble. Our following group photos take so long that another era is penned onto the castle’s history before we are ushered out by descendants of the curator.

I’ve done ever so well, really I have, but come Friday I can not longer hang around for 2 hours in the morning while people gradually surface and then pontificate over plans for the day. With enthusiastic relish I’m off out of the door to saunter by foot over to Saundersfoot. That didn’t really work did it. Anyway, the sun is out, there’s a coastal path and I have miles in my legs, although only four of them will be required. Miles, not legs.

There are some fine views of Tenby as I walk northwards. The route is well trodden albeit steep in places and it is refreshing to walk on my own in a bubble of tranquillity. A couple of tiny coves en-route could easily entrap me for the day but I don’t stop for long. It’s relatively quiet except for the odd dog walker until my bubble is burst by an arguing family. It brings a smile to my face!

What to say about Saundersfoot? It has a decent beach but there’s not enough else there to keep me for long, although one shop does stock some very special merchandise…

A bus has me back in Tenby within 15 minutes. Sister has been shopping, boys have been to an arcade and parents have taken inspiration from an advert in Monks & Monking magazine and caught a boat to nearby monastic Caldey Island. Everyone is happy.

You might notice that I have so far failed to comment on the whole family thing. Where to start? Here’s some insight into the family dynamic:

Father: Fixated by the old hardware shop next to our cottage. He keeps trying to lure me into unrewarding conversations about plasticiser though quite why he covets this substance is beyond me. Another longer held obsession is string. One morning I find that the frayed old ribbons struggling to secure my beach mats have been rendered obsolete by the string fairy. Even my laptop charger gets the dad treatment as it is once again coiled into its pristine pre-retail form.

His poor hearing is a regular frustration. One morning I sit opposite him to drink tea and eat breakfast. After 5 minutes of talking to him he looks up from his paper startled – “oh, I didn’t see you come in!”. He is the only person I know with stronger pudding leanings than myself.

Mother: If by some freak of nature we had found ourselves collectively sucked into a black hole and ejected onto the stark plains of a planet in some parallel universe my mother would still spout forth a stream of superfluous facts about our new environs. She would also invariably claim that we all came here when I was 2 years old and do I remember.
She has a need for cartographic satiation wherever we might be. Her procrastination when holding a camera is hereditary – my grandmother also used to faff around for eons getting people lined up, before eventually stepping back into a bush and then reeling off a shot with the lens cap still on.

Sister: An entirely ridiculous individual both verbally and behaviourally. She inhabits a different time zone to the rest of us and we can only conclude some allergy prevents her from making any decisions. Also: charity shop addiction and a level of pedantry that will drive any reasonable man to his wits end.

10 year old nephew: Will (and does) climb anything. Cannot stay still for five seconds. We shared a twin room and he could be found in a different position each morning (eg: feet on pillow or head hanging off side of bed). Sleeps for England and Wales. Enjoys fighting with 12 year old.

12 year old nephew: Has a Tardis for a stomach. An example of his voracious appetite came on the one evening we ate out when he finished his own (sizeable) meal and then polished off leftovers from three other plates. I dare say he still felt peckish when we got back to the cottage and had a snack. Enjoys fighting with 10 year old.

Me: I just want a peaceful and easy life but it’s not easy when I’m drowning in a seething melting pot of personalities. If I was a little obsessive it was a survival mechanism – a reaction to my environs. I enjoyed doing some cooking this week including freshly made pizza and apple crumble using fruit from the burgeoning trees in the back garden.

Food was problematic at times in the week due to different preferences and this tested of my patience because I like fresh food prepared with integrity. I also like a pint of quality real ale in a charismatic old pub which proved elusive in these parts. There were compromises and frustrations aplenty for somebody used to living alone.

Yes – a great week was had by all. We laughed (usually at my dad’s expense), we occasionally argued and we did ridiculous things like share the Guardian crossword each day by copying the grid by hand in triplicate. Overall it was refreshing to spend some quality time with each other yet have the freedom to do our own thing when we wanted to.

What can we conclude from proceedings over the last 7 days? Pembrokeshire is lovely when the sun shines. The Welsh know how to build a castle. And the ideal length for a family holiday is approximately 5 days.

One thought on “The Last Resort?”