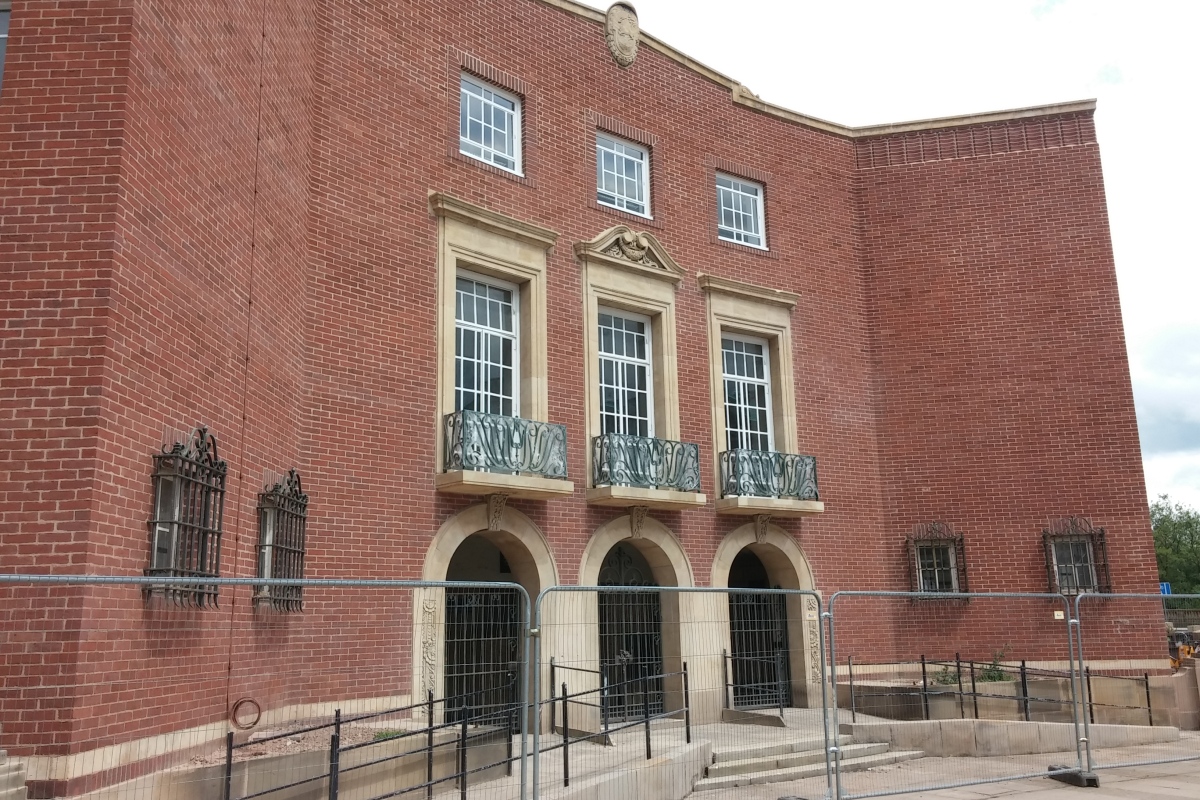 Here we go again – I couldn’t help myself. Somebody tweets there’s a behind closed doors tour in Derby and two hours later I’m wearing a hard hat and a high viz jacket. Previously such curiosity has led me into Friar Gate Square and Sadler Bridge Studios, this time it’s the former Derby Magistrates Court…

Part of the appeal for me is that unless your have been a member of the judicial system or criminal fraternity (or commonly both) your chances of looking around the building would be slim. And you would want to look around it if, like me, you like the art deco style of architecture.

There are few external clues of the building’s former use beyond the inscription above the side entrance.

Entry on this occasion is via the back door. I’m part of a tour that is pitched primarily at prospective businesses with an eye on the new office space that will result from the redevelopment work.

There can be no illusions that this is anything other than a building site. High quality wooden flooring is protected from the crude abuse of builder’s boots and wheeled appliances by floor coverings. I poke my head into a room piled high with desirable parquet bricks and pray these are going to be cleaned and re-used.

The ground floor is crawling with tradesmen who seem a little bemused by our safari tour. A subdued atmosphere suggests they have been told to be on best behaviour while there are visitors. We are rapidly whisked up to the top floor where the selling points of the new offices soon become clear.

As our host describes the amenities to an attentive arc of listeners I peel off towards the window to catch the views outside. I’m less interested in floor space and whitewashed walls than the spectacle of Quad and the market hall across the other side of Full Street. This really is a prime central location for offices.

Out of another window the recently refurbished council house looks grand and imposing. With the re-opening of the former Magistrates Court the Exeter Bridge corridor is certainly on the up.

And there is Exeter Bridge. You can see the Brewery Tap also. The chances of my being productive in such a work environment drop with each new vista.

The proximity of the river has been a concern for neighbouring buildings like this in these times of increased flood risk. Did I mention the view east along the Derwent to the Silk Mill? At this point I’m standing on an ornamental balcony hoping they have repaired the crumbling supports I recall seeing from ground level while previously strolling along the river path.

So the views are magnificent and that’s not surprising given the location. Best of all there is no sight of the monstrous omnipresent breeze block that is Westfield/Intu.

We all shuffle on down the corridor. What appears to be a spaceship is in fact an art deco skylight. There is more of this subtle elegance to be witnessed in the panelled meeting room.

The room may still be a work in progress but you can see that it’s going to be magnificent.

The period fireplace is being preserved and I wonder how many other interiors of this quality in Derby buildings have been stripped bare over the years in a misguided drive for modernity. The irony is that in 1935 this building replaced the demolished 17th century Exeter House which was in itself a magnificent building of great historical significance.

If upstairs was mostly about the outside then downstairs is all about the inside.

When the building re-opens this simple but classy spiralling staircase is going to make for a grand entrance. There remain a few signs (literally) of a former existence that is hard to imagine today…

…until the skeletons come out of the closet as we enter the business end of the building. Now things are getting interesting! The prisoner holding cells are an integral part of the history (and structure) of the building.

The gloomy and oppressive cell corridor feels a million miles from the bright and airy office space upstairs.

At this point I realise that I am alone in the catacombs as my party has moved on. Spooky. What do you do with prison cells in an office redevelopment?

The site plan I’m clutching tells me that you make the cells into WCs and storage space. Seems sensible. The Local History Museum is lined up to occupy the ground floor apparently.

The tour is over, or at least I assume it is as I’ve lost the party. It’s quite a maze down here but eventually I retrace my steps to leave the ghosts behind before stumbling out into bright daylight. Only the site foreman’s portacabin breaks the view to the Silk Mill across the gravel strewn car park.

A few months ago the dilapidated old cop shop stood here awaiting merciful dispatch by the demolition crews. Next up for this site is a hotel, which can’t be as hideous. Can it?

We will see, but today I’m left feeling that the redevelopment of Derby Magistrates Court does it justice.