It’s In The Eyes

Anybody that has predicted all the results so far clearly knows nothing about football. As for us experts we have all got it wrong…

The captain gets first say tonight. In so much as you can say anything… 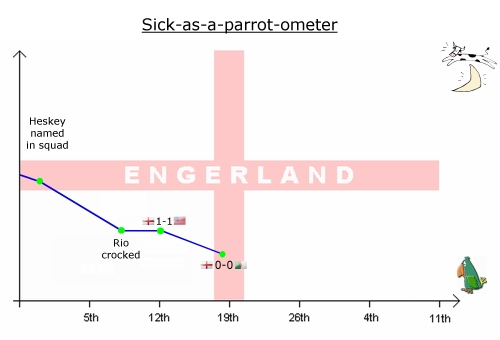 Sometimes from amidst a dense cloud of confusion and chaos emerges stark clarity. The fog of war engulfed the England squad this evening as they fought a shadowy spectre on an unforgiving battlefield. Passes went astray, progressive play hard to come by. Fits and starts. A glimmer and then a gaffe. It was a nothing performance by a highly talented England side against an Algerian team that in playing to their potential were scant opposition for any team of calibre. So what went wrong?

There were so many clues. The pre-match hubbub about the keeper was an irrelevance. The stale and predictable tactics gave an early hint to the problem. The introduction of Barry provided some initial stability and impetus from the back but this again was a red herring. Every player performed below his best to one degree or another. Rooney was largely peripheral. Gerrard kept sticking when he should have twisted and vice versa. Lampard was away with the fairies. You only knew Terry was on the pitch when the ref blew for a foul. Here a truly world class spine was lost in some parallax an eyes blink to the left of reality. What can cause not one or two but all of a team to under-perform to such an extent?

Still confused? Were heads down? Not really. Were the team unfit? Not in the least. Were there flashes of temper or loss of disipline? No, just a booking for a block on a player. Were the team trying? You bet. So we have 11 fit players of quality all trying hard, playing with discipline and yet they under-performed and failed to deliver.

Everything you needed to know about the reasons for tonight’s performance (and hence result) was there to see in the player’s eyes. There was fear, pressure and frustration. Lampard was worst affected – he was paralysed. Gerrard was strong but – he appeared to be carrying the world on his shoulders. Carragher wore the look of a soldier about to leave the trenches. Football is a game you play against yourself. That shadowy spectre they fenced with all evening was England. There was only one team on the pitch and it played out a draw with itself.

So for all of the frustration and disappointment amongst the fans I would implore you not to judge the players because they are blameless, although they may blame themselves.

The best managers don’t appear to do anything. They gently guide a team in a direction. They define points of focus for individuals and create an environment where everyone knows what is required and expected of them but equally importantly they know why they are valuable. Individuals are given the latitude to express themselves and channel their hunger for the game into something positive. That is the art of management at this level because all of the basics are givens to these elite players.

Brian Clough is the perfect example. He would take an exceptional crosser of the ball and tell him in no uncertain terms that his job was solely to put the ball onto the head of the centre forwards. There would be no criticism for not tackling back and no request for the player to play a foreign position. That player would be in his element excelling at the thing he does best and being judged on those simple instructions alone.

Fabio Capello is the strict disciplinarian. There are many admirable facets to this approach, especially when dealing with multi-millionaires who usually rule the roost on their club turf. He rules the team with an iron fist, Iron is strong but it is also inflexible. The players are not happy with the formation or tactics. They can’t say it but it is obvious. Unlike the rebellious French team the England boys are heads down trying to deliver Fabio’s plans on the pitch, but they aren’t comfortable with it and each time they fail to execute these plans the manager is heaping the pressure back on them to do better next time instead of looking at himself. A great manager of men stands firm – at the right times – but crucially knows when to change course or take advice from elsewhere.

Capello’s legacy to his role as England manager rests entirely on what he does for the final group game against Slovenia. If he stands firm nothing will change, we will draw at best and exit the tournament. Alternatively if he drops the barrier he has erected between himself and the players, has a laugh with them and changes the squad and formation to allow them to express themselves we might just see the kind of exhillarating celebratory football that wins world cups.

What are you doing on Wednesday?