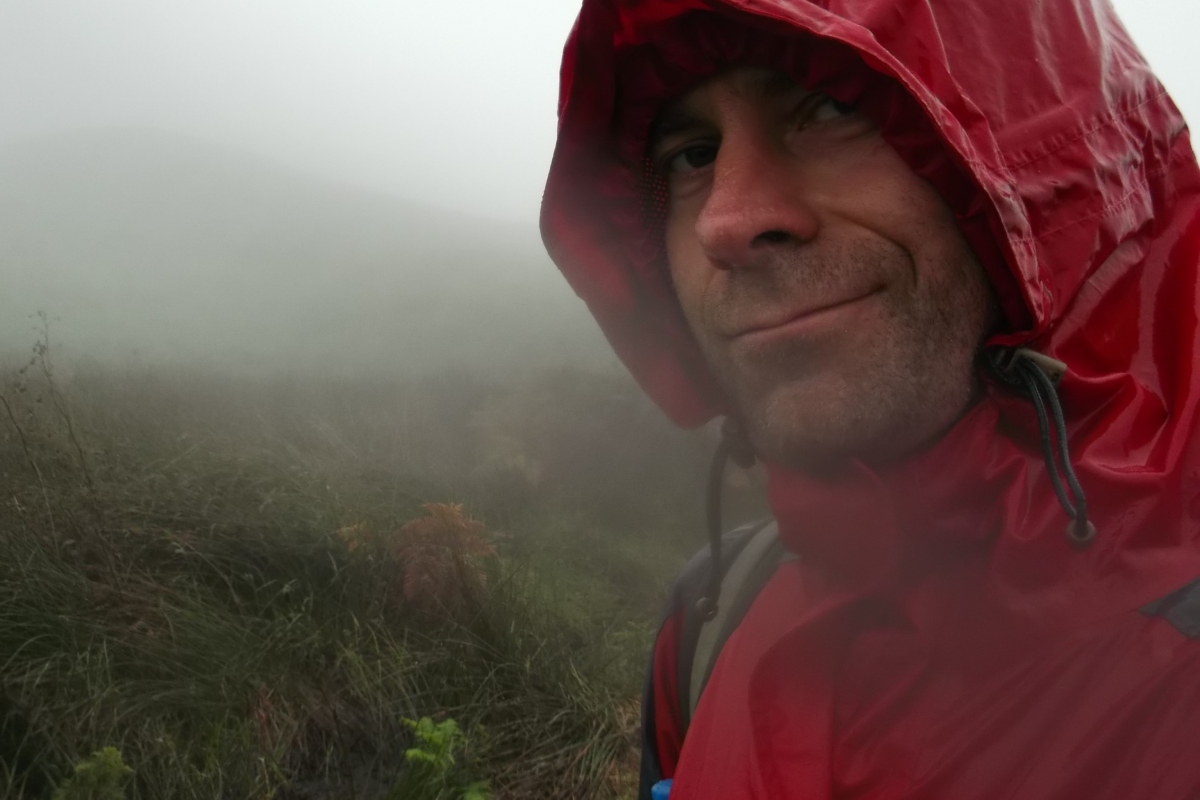 Rain was forecast and sure enough a tinkling on the barn roof greets my awakening. It felt cold last night but I just about got by using a super-light sleeping bag liner.

One bowl of porridge later (courtesy of the microwave in my barn-suite) I go to pay a ridiculous £8 to the farmer who has a day of interior decoration lined up. It’s the Kildale show tomorrow and he is judging the ferrets. There’s also going to be sheep-dog trials and I wish I could be there.

Rain is expected all day and this is already lined up to be the toughest section of walk but I’m determined to complete it. Besides there is no public transport alternative. As I rejoin the Cleveland Way the rain steps up a gear from steady to strong forcing me to reconsider my decision not to pack my waterproof trousers or gaiters. This decision was based on a fine long-range forecast and the desire to save weight, plus my falling-out with waterproof trousers as you only end up sweating and getting wet regardless. An hour into the walk and my feet are soaked due to water ingress through my socks. Hmmm, gaiters…

There is no let-up and by the time I reach the Cook Monument I am as wet as if I had fallen in a river. That’s no surprise given that the path is now a river, which has the solitary plus that I can just plough through it without a second thought.

It’s telling that yesterday I had a better view of the Cook Monument from 2 miles away than I have now from 50 yards. Photos are nigh on impossible and with my new camera hermetically sealed in a dry box the few snaps I reel off from my phone are as damp and pathetic as I feel.

I have read that you can often see the sea from the top of Roseberry Topping (a dominant hill) but I’m at the foot of it and I can’t even see the hill let alone anything beyond. Impossibly the rain switches from strong to intense and it’s obvious that this walk will be about survival rather than enjoyment, with 10 miles to go and no prospect of any shelter.

What a grim, joyless march of attrition! On one hand I’m laughing at the absurdness of my predicament and placating myself that thousands of fleeing Syrian refugees would gladly swap their plight for this ordeal, but it’s not funny.

Although I can’t see them I know my feet are suffering. Can you get trench foot in 4 hours? Soaked trousers have led to chaffing of the unmentionables. My hands are so cold that it is a struggle to use them and while my legs are fine I need food to sustain my energy levels. When a tree finally offers a little shelter I struggle to eat because my jaw is stiff with cold. Then, my lowest point when I take a wrong turn and have to resort to using my compass.

In almost 5 hours I don’t see another walker which is unsurprising. Water is streaming off the fields and forming rivers that will cause flooding downstream as I am to later learn.

My eventual arrival at the Wharton Arms is a MASSIVE relief. People at the bar are taken aback by my drowned rat appearance. I should be celebrating reaching the half-way stage but I can’t envisage completing the walk the way I feel now.

After a hot shower, dry clothes and 3 hot drinks to raise my core temperature I’m able to eat. Landlady Pat can’t help enough. I planned to take my laundry to a Saltburn laundry tomorrow but she lets me use her washer and dryer.

The local news is full of flood stories. Saltburn 2 miles down the road has been hit badly – all the roads in have been cut off. And to think I almost booked a night there. I’ve no energy to go out and make anything of the evening. I’m totally exhausted.  Sleep is all I … zzzzz

Looking ahead
Thankfully a day off as I couldn’t walk again. I am going to REST

…and the route taken… 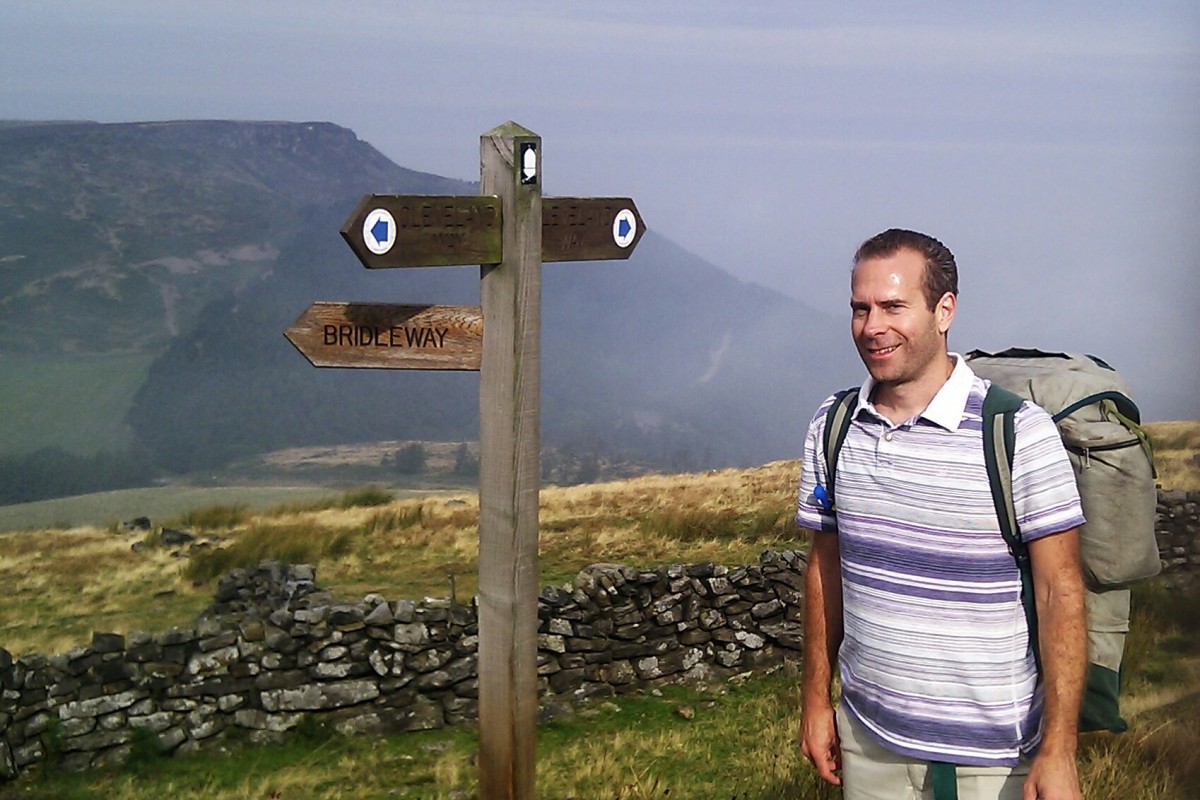 I would be lying if I said I slept well. Owls woke me at 4am followed by Nellie the cow mooing through my window from the field at 6am. That’s country living. A glance outside reveals a low thick haze and it isn’t clear which way the weather is going to go.

Around the breakfast table Nigel and I are joined by Bob, also walking the Cleveland Way. Robin has been up since 6am tending the livestock but he had found time to cook breakfast for us on the Aga. As I’m last to arrive I get everything that nobody else has had – 2 sausages, 2 large black pudding slices, 2 rashers of bacon, 2 eggs and some mushrooms. My face says it all and everyone else thinks it’s funny. When I finish the lot they are no longer laughing and we are all equally surprised, but with such superlative quality local produce I’ve no regrets.

This is day 4 of the walk and I’m the lightweight with a mere 9 miles to walk to Kildale. Bob has 14 miles to Guisborough and Nigel is yomping an improbable 24 miles to Saltburn. In my defence I’m lugging my rucksack around while Sherpa Vans are shifting Bobs bag and Nigel’s wife is driving the “support car” and picking his bag up.

Robin gives us all a lift up to the trail in his twin-cab pickup. I had considered walking but this is a dull 3 mile section, plus I would have been spilt up from the others.

Nigel forges ahead. He has a long day ahead not helped by the fact he chatted with Robin until midnight, who plied him with two fingers of whisky. My kind of B&B!

Bob and I climb the path more sedately and the sun is soon winning the battle against the fog.

This section of the trail stays high and we have enough of a view to enjoy without really seeing anything in detail. The way is level and makes for a comfortable walk. There are clues to former quarrying – there be iron in these hills – none more so than the flat straight section of path formerly employed as a steam railway for shifting the ore.

There are few landmarks as such but Round Hill stands out (literally) as at 454m it is the highest point on the moors apparently. If I was walking alone I would be stopping regularly for a break but when you are enjoying conversation with a fellow walker you just keep walking. And so it is that at 12:30 I arrive at my destination Kildale camping barn and Bob goes his separate way. The sun reigns unopposed now and it’s great to know that I can now relax, read and perhaps write another blog.

My welcome is nothing but effusive. The owners are painting the farmhouse so their sweet dog, starved of attention, is desperate to play. I oblige with some Olympian stroking. It’s amusing when the onlooking cat butts in to jealously demand equal belly stroking rights.

Kildale barn – part of Park Farm – is a hidden gem. It lies just strides off the trail and commands sublime views plus the renovated buildings are full of character. Most astonishing is my personal accommodation. Because I’m early I can choose a private “barn apartment” instead of the larger communal barn. What an incredible room, with kettle microwave and radio – and for just £8 per night!

After a shower I sit on a bench in the sun watching farm vehicles bailing hay when a lady leaving the campsite generously gives me an icy can of lager surplus to her requirements. We chat awhile and she describes what a relaxing visit she has enjoyed, which seems entirely plausible.

On day two I didn’t want to walk a step further than necessary but by now a 6 mile round trip to the Dudley Arms in Ingleby Greenhow doesn’t concern me at all.

At the end of the pleasant pastoral walk a tiny butchers has an adorable selection of savoury pastry products but my catering is already all mapped out and I can’t think of a way to squeeze in an extra meal. The pub isn’t open yet and as I wait three young guys pull up on old bikes. They are doing a cycling pub crawl and this final stop is their fifth pub of the day. None of them are really cyclists and it’s clear they are just having a whole lot of silly fun.

We must all look like alcoholics as we pile through the doors when they are unlocked. Their WiFi is non-functioning and the food

distinctly forgettable but the ale is OK. I’m careful to leave while there is daylight and by now there’s a cutting chill in the air that demands an extra layer.

On my return there’s warming news with the belated arrival of my new cheapy camera. The irony is that with no little effort I have been pulling some acceptable pictures out of my poor quality camera phone. As I settle in for the night little do I realise that tomorrow would not be a day for taking photos…

Low point
No WiFi in pub so no blogging

…and the route taken…