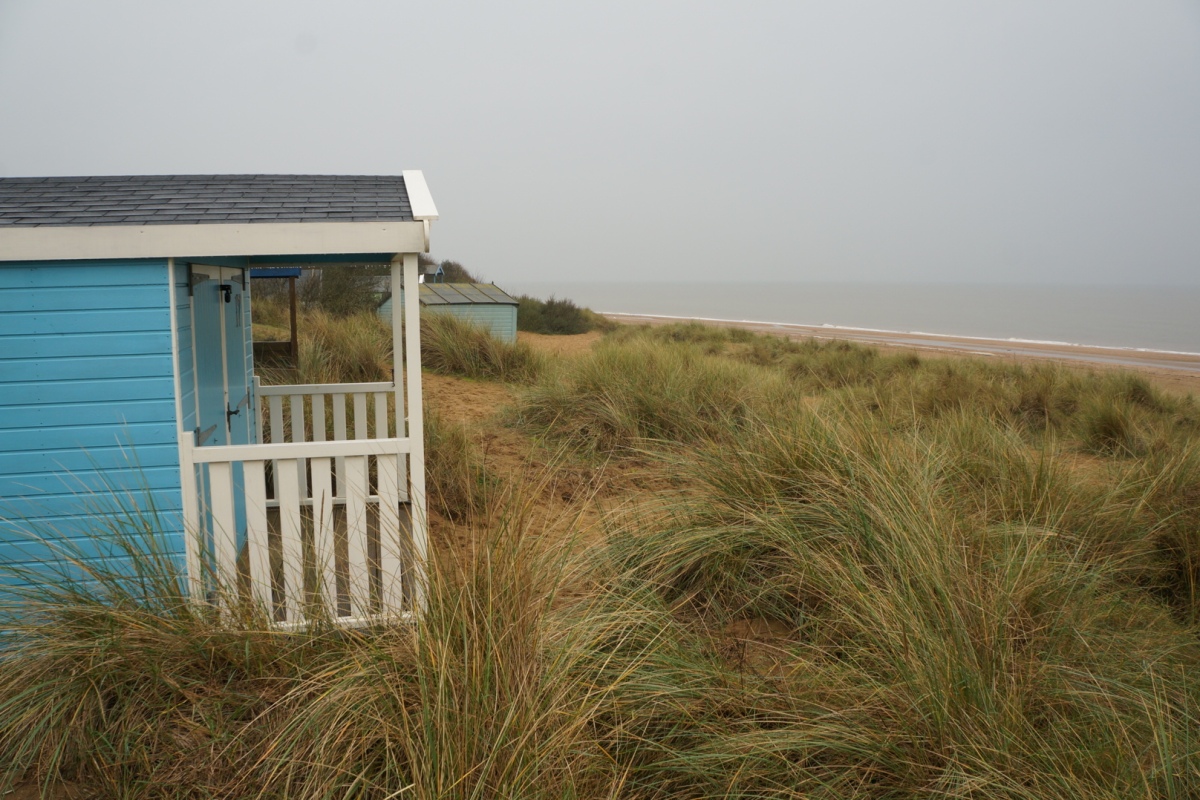 Today’s the day. It starts with a B&B full English breakfast of remarkable mediocrity. Fuel not fun. I have a bone to pick with all those B&Bs claiming to have the best FEB. Only one can be the best so statistically you are all lying. I wouldn’t mention any of this if the landlord hadn’t crowed about his when it comprised the cheapest ingredients cooked badly. Enough said.

My hosts are nice people though even if they think my walking plans are mad. Landlady tells me of a deceased adult seal washed up on Hunstanton beach this week. It reminds me there are now supposed to be many newborn seal pups flopping over the sands at Blakeney Point down the trail.

Outside its tipping it down. I mean those huge raindrops that individually soak you. Dressed for the weather I stroll down to the sea front. There’s scant visibility. The Norfolk coast path soon heads off into the dunes where a village of locked up wooden beach huts conjures up faded dreams of summer.

The regulation convoy of dog walkers dries up and it’s just me, the rain and the sound of the surf carried on the wind. The sea becomes increasingly distant as an expanse of wetlands forms a wedge between us. I can hear a lot of bird chatter but I’m not seeing that much.

Whenever I come across a group of bird watchers they always appear to be in an agitated state of excitement as if witness to a dodo. I ask what they have seen but it’s routine stuff. Then I ask about the sparrow sized bird I saw with a white underbelly. Everyone turns and focuses on me…  Did it have white wing tips?! No. There’s a collective sigh and eyes return to lenses.

At Holme the Peddars Way national trail links up with my route. The coast path is well signed although “Cromer 44 miles” isn’t heartwarming. It’s easy walking though and as the sea “returns inland” I can see what looks like a fine sandy stretch of beach.

The Wash gives way to the North Sea and the path deviates inland again on a man made embankment that has for some reason angered the weather gods.

A host of new bird activity heralds the return of the mudflats. It’s here that I see various waders including a curlew that pokes an improbably long bill into the shallows in a hunt for food. Would that hold currency with the bird watchers?

I can smell Thornham before I see it. When I get closer the warming aroma of smoke from an open fire is seen to originate from a fittingly quaint cottage with the year 1682 emblazoned above the door.

The rain has finally ceased and in the absence of better options I break for lunch in a bus shelter noting how quickly I could reach my destination if I simply jumped on the next one.

Sandwich consumed the post-lunch route takes a disappointingly superfluous detour inland a mile south, east and then north. A seemingly vast tract of farmland is broken only by the odd pile of harvested root crops.

Normal service resumes at Brancaster. Duck boards make for dry feet and far reaching views of reeds that I believe are harvested for roof thatching.

It’s not far now to my overnight stop. Brancaster Staithe Quay used to be a major port for malt shipments. Today it serves as a base for shell fishing vessels.

There’s a stench of rotten mussels but that won’t put me off eating them later.

Brancaster is renowned for mussels. A couple of outlets on the main road sell the days catch.

Burnham Deepdale backpackers lodge is a modern professionally run outfit. After a shower and change of clothes I’m human again but at a physical cost. Aside from the deep cut in my thumb obtained while slicing parmesan for today’s lunch (a decidedly middle class walking related injury) my right knee doesn’t want to bend. This is a worry – I need it tomorrow!

Until then I can only hope that ibuprofen, Brancaster Mussels and Brancaster Brewery ale at the White Horse will have a remedial effect…

In a nutshell
– A walk through the wetlands, kingdom of the birds

High point
– When the rain stopped

Low point
– Aches & strains that could become a problem

Looking ahead
– A drier hike to Wells

As I smugly sink into a sofa in the luxuriant 1st class passenger lounge and connect my netbook to the WiFi the smart and professional receptionist asks to see my tickets, to prove that I am “the right sort of person”. After all we wouldn’t want those “other” types getting in here would we? It turns out that I am one of the other types because my advance 1st class tickets don’t qualify for the lounge unless I pay an extra £5. My train is in 10 minutes so I turn my back at the pug faced battle axe and strop outside to mix with MY people. It was crap in there anyway – full of yattery business types dictating to their PAs. And the sofa was no great shakes.

Platform announcements may be more audible than of yesteryear but they make no more sense. The news that the 9:01 to London St Pancras is imminent and that first class travellers should make their way to the rear of the train is less than helpful since they don’t mention which direction the train is approaching from. I happen to know that it arrives from the left – the opposite end of the platform to the 1st class business lounge – and that it always will do, raising questions about the recently redesigned platform layout.

Once aboard I’m please to see that suited corporates are sparse (presumably they took earlier trains to the capital) and that there are “proper” people aboard which makes for better people watching, and less obnoxious conversations to earwig.

A date with Jimmy Hill (ugh!)

My lack of itinerary for the weekend is a front. I have ideas. After booking the hotel I decided that I was going to see some football. There are a dozen or so London clubs so there should be plenty of games to chose from over the weekend. Except this is FA cup weekend and all the local teams have been knocked out except Chelsea whose tickets are not on general sale, leaving just Fulham who play Notts County on Sunday.

Yes I can book a ticket online but I am checked into my classy Oxford Street cupboard by 11am so decide to tube it over to Putney Bridge & collect one in person. Craven Cottage is a proper old fashioned cantilever stadium that sits between Victorian Terraces and the Thames. I approach it along the Thames footpath when it starts to rain and I’m glad that I packed an umbrella but less chuffed that it is currently sitting in my hotel room. Fulham looks interesting but I’m getting wet so ticket in hand it’s a quick hop back on the tube to Covent Garden and…

…the London Transport Museum. It sits bang next to Covent Garden and I have walked past it on numerous occasions without venturing in, so today is the day. It’s unsurprisingly full of London transport paraphernalia.

I’m not too bothered about the “kit” so much – although there are some interesting old horse drawn trams, underground carriages and buses of a certain vintage – but the social history is compelling. Particularly striking is the realisation that so called modern themes relating to the drag of the suburban commute through to the environmental impact of the transport infrastructure were very hot topics as early as the 19th century. Three hours well spent.

I’m a sucker for Mussels and Belgian beer so hunger pangs in the Covent Garden vicinity can only result in a trip to Belgo, next door to the Donmar Warehouse. My advice if you haven’t been there is to go even if you hate mussels. Situated in a large celler with oodles of copper, stainless steel, naked flames, beer to die for and the sort of comforting food to counteract the anticipated hangover this venue has an undeniably fine ambience. Efficient and engaging staff steer you to a trestle table next to fellow diners where there are plenty of people to observe and snippets to overhear. The waiters dress as monks but that’s their only bad habit. Doh!

I enjoy an entrée of 5% Cristal lager – one of the weakest beers on offer, followed by a yummy 7% Affligem Brune with a darker palour. There are many stronger beers served by the bottle – Chimay, Roquefort, Leffe, Steenbrugge, not to mention the 12% Bush Scaldis, but it’s 6:45pm and the line must be drawn somewhere.

Since I’m sat here in a Belgian restaurant I order some mussels in a Thai broth. In fairness they are very nice but nothing I couldn’t do myself. That said, it’s the whole package of food, beer, venue and clientele that makes this a worthy visit.

Time for a brief mozy around the Seven Dials area which always draws me in with its designer stores, independents and quirky coffee & nibble outlets followed by a pleasant stroll through the increasingly populous streets to Leicester Square and onto Chinatown. Sunday is Chinese New Year and this year it’s the turn of the Tiger. See my previous blog entry for your prospects this year if you must.

The lanterns are out and there is a tangible buzz. It’s a shame that the major celebrations here are taking place on the following weekend because they would be a wonderful sight to behold with fireworks and street processions led by human dragons. I console myself by joining a queue of people at a street stall in the belief that they must know something good lies at the other end. The zen navigation technique pays off handsomely with a thing probably best described as a pork dumpling in chilli sauce. A terrific treat for the taste buds. Perhaps I will return here on Sunday. Surely something festive will be going on, unless the Valentines crowd render the evening a write-off.

Things can only go downhill from here so I head back to the hotel cupboard. It may be early but there’s a few miles in my legs today.