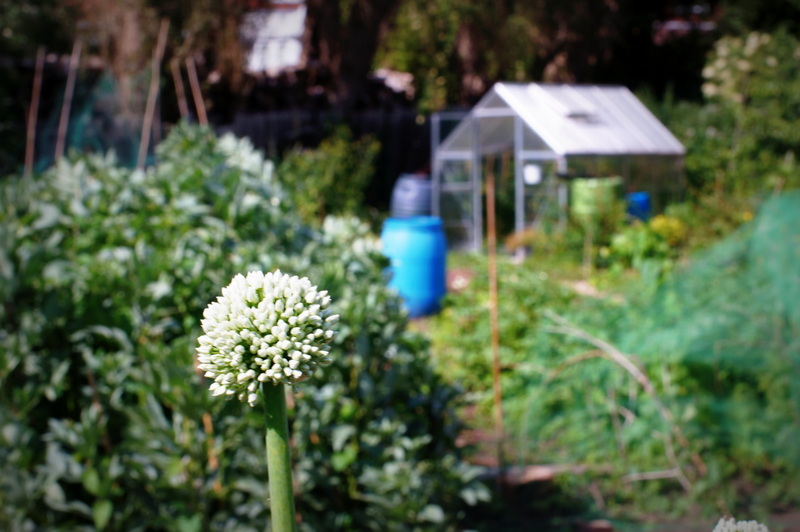 How times have changed. There has been no travel, scarce cooking and few nights out. My normal summer rituals have taken a back seat. This is what custodianship of an allotment does to you.

In the three months since I took on a local plot my weekends and evenings have been almost entirely devoted to gaining a foothold in the fast-receding growing season – from a standing start.

At first I took an odd satisfaction from weeding and turning soil in preparation for planting.

That wore off as the sheer intensity of effort resulted in a strained back and a broken fork.

Short of time and manpower it became apparent I was going to have to throw aside the New Gardener’s Handbook# and take some shortcuts – or Hacks as we IT people call them.

Now I can prepare an area in 20 minutes that would have taken three hours using a fork. Despite this half of my plot remains unprepared. A seasoned plot holder told me that in his first year he focussed entirely on clearing and preparing the ground. He didn’t plant anything.

On that basis I should be pleased to have my potatoes in the ground, peas climbing a frame and a selection of brassicas growing under netting.

Think of a polytunnel as a plastic greenhouse. You can maintain a higher temperature and add a couple of months to the summer growing season for plants that need a warmer, more stable growing environment

After much research I invested in a 3m x 6m beast from Grow-Ur-Own on the basis that it looked a lot larger and sturdier than the average unit.

Unfortunately it came with almost entirely useless assembly instructions and took a weekend to erect, although I secretly enjoyed the challenge.

The most painstaking part turned out to be fitting the cover over the frame. In the end it took 4 of us to get the job done after which I was able to bury the edges in a trench designed to stabilise and protect the plastic cover.

The cucumbers in particular grow at a prodigious rate in this environment and a first batch has already made it into pickling jars.

Of course none of this growth can happen without a lot of watering. With polytunnel pots requiring 40L of water every day how are you supposed to have an evening off, let alone a week away?

Once plants are in the ground they can generally look after themselves – especially with all the rain we have had this summer. It’s different for the pots under cover so I investigated the options and came up with a solution for a timer controlled irrigation system.

Now this isn’t as simple of you might think. With no mains supply I had to create a gravity fed water supply with sufficient pressure to keep 50 pots irrigated for up to a week. I managed to (literally) unearth 48 bricks from my plot to create a raised base for a 230L water butt which fed into a tubing system via a Claber battery operated timer.

As I write this blog from a sunlit cottage room in Padstow I can only hope the solution is operating as designed. If it is working then I will simply have to top up the water butt once a week when I return from holiday. If hasn’t worked then everything will have died – either way my evening watering duties will be a thing of the past.

OK, this isn’t something I can take any credit for but the fact is that the previous plot-holder left some goodies behind and I’m not one to let things go to waste.

A thriving fruit bed has already yielded several weeks worth of succulent raspberries plus a smattering of strawberries.

Before I left for Cornwall I picked and froze over a kilo of redcurrants and there is much more to come.

Factor in three established heads of rhubarb and I am getting quite a decent return without expending any effort.

I can barely believe how much has been achieved in the last 3 months. Sure, it has been LOT of hard work but also very satisfying. I’m saving £30 per month on gym membership alone and getting much better exercise so there really isn’t anything to complain about on that front.

Work on the allotment is as energising as it is tiring. Every day something has grown or flowered. I become engrossed watching bees flit amongst the comfrey.

A frog (called Jeremy) pops up sporadically in the polytunnel where I commission him to keep on top of any insects. Blackbirds sing so beautifully that I almost feel guilty for netting off the redcurrants they love so much.

One day, maybe soon, I might visit and not actually do anything. Just relax and take it all in…