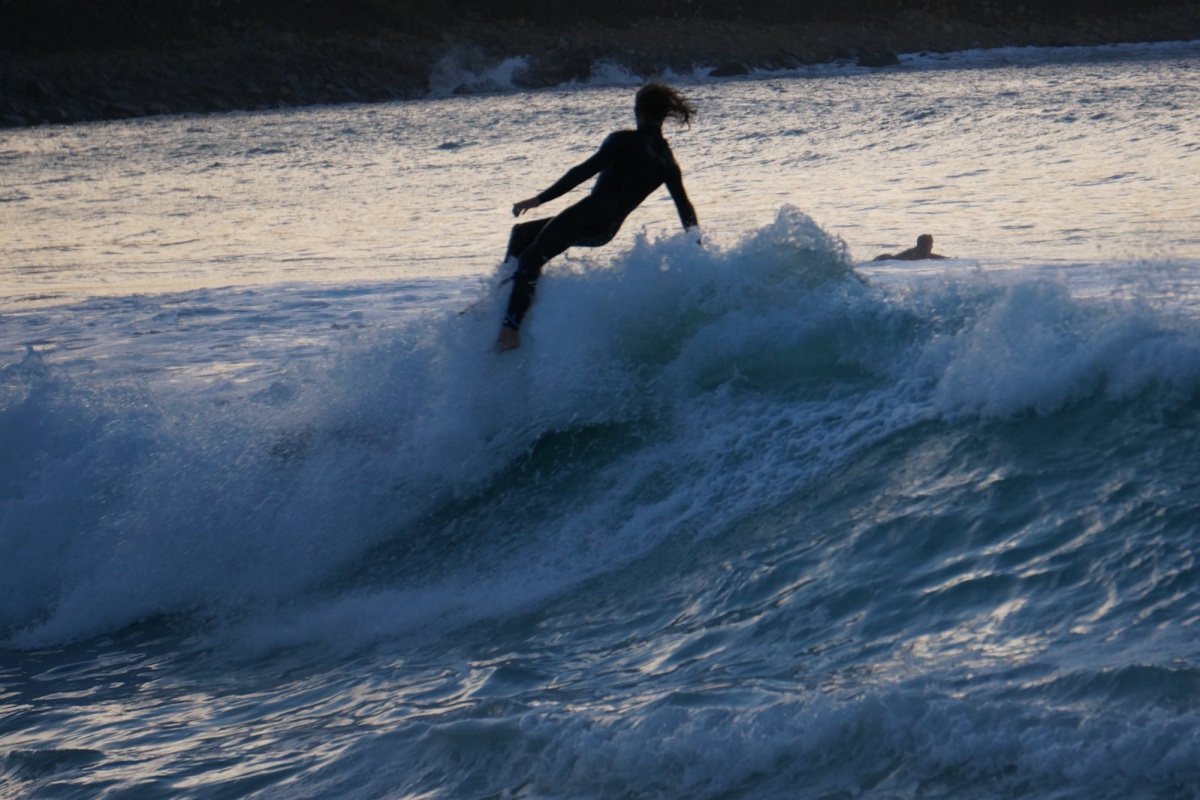 Cornwall and Surfing. I’ve never thought of one without the other.

My earliest associations go back to family holiday visits to the rocky inlet at Trebarwith Strand where each year I would look on as wetsuit clad figures would crash into the water for better or worse.

Nothing epitomises this life aquatic more than the three young Trebarwithian brothers, bronze skinned and blond curly haired, who would play out each carefree summer in red neoprene between rock and sea. I wonder where they are now.

It remains a mystery as to why I never made it onto a surf board myself. Frisbee and frenetic games of badminton on the golden sands were my distraction at low tide and once the beach was reclaimed by the sea we would scramble high up onto the rocks to watch the waves smash in below in the hope that some thrill seeker would get a soaking on the edges. And then to the long departed and sorely missed House On The Strand for cake and familial ribbing. At least we still have that.

Roll on innumerable years. St Ives lies south of my teenage memories. This picture postcard harbour town is best known for its artisan credentials as underpinned by the prestigious Tate Gallery. The westerly beach at Porthmeor may only provide a subplot to the town’s story but it attracts a small but dedicated chapter of surfers who plough the waves from dawn to dusk.

A daily vigil from the expansive ocean facing window of my hilltop holiday loft apartment is educational. With binoculars on full magnification I am able to sit in on a beginners surf school at the sheltered far end of the beach. An instructor demonstrates the transition from prone through to standing in a single fluid movement, now a well rehearsed reflex. He is almost encircled by a crab-shell arrangement of students who lay restlessly on their land-stricken boards with half an impatient eye on the rolling froth that begs their entry.

This afternoon I don sandals and make a steep descent to the beach with some camera gear. There are perhaps 20 independent thrill seekers in the water at the closest extent of the cove. To my untrained eye the conditions look a little hairy.

More experienced surfers bide their time. If a wave is too premature they ride over it. Too fully formed and they dive under it. There seems to be a lot of discussion between groups friends. Some barely attempt to ride any waves – their immersion in the rolling brine of Porthmeor purely social.

On this October weekday I have to wonder how surfing fits into people’s personal schedules – work, study or family. I guess if you really want to do something you find a way.

For every sculpted ride there are several wipe-outs, some spectacular! I’m traversing the beach with a temperamental zoom lens and the closer I get to the action the more I can smell the adrenaline. There’s a palpable sense of energy in the waves and I completely identify with the urge to connect with it.

Drawn further towards the breaking surf on a rising tide it’s not long before my sandals become soaked. At least now I can stop trying to dodge the water, but it is colder than I realised. The autumnal sun is frizzling away and my body temperature has plummeted but I still can’t drag myself from this scene. I’m forever holding out for one last action shot.

The waters are almost empty now and I catch a few words with one of the departees as he drags his board up the beach. Despite suffering with a cold has he been unable to resist the lure of the surf. With a broad smile he tells me that conditions today are brutal. Those entering the water have done so in spite and not because of conditions. “It’s all good!”.

I’m told to keep an eye on one young guy who is “the one to watch”. He’s confident for sure – out some distance beyond the rest. I reposition myself behind a rock out of a gusty wind that is throwing up white caps of foam in the bay, and zoom in on the maestro at work. Twenty minutes later it is becoming decidedly dark and I am chilled to the bone yet star child has done nothing but tread water.

The final stragglers are packing it in for the day and I follow suit, retreating through the gloom towards the faint warming glow of the Porthmeor beach café lights. A waft of stale frying oil floats my way and I’m not holding out much hope for a high quality cappuccino. Warm and wind-free will suffice.

Inside my lack of expectation is met. It’s quiet here now, just a lonesome well-wrapped holiday-maker sipping a hot chocolate and a couple of sandy surfers, their mandatory long hair wet and tangled from the day’s encounters.

From my window I watch the hillside lights of Porthmeor dot on one by one. The seaward view has assumed a bluish hue of monochrome, broken by the distant lamps of small fishing vessels and crabbers.

One human spec bobs on the surface 40 yards from shore. He’s still out there! Waiting for that perfect wave. The dream that won’t die.